We had spent almost a week in Chiang Mai, enjoying the pleasant pace of life in that amazing town. But it was time to move on, and to be closer to the airport, as well as to enjoy a place I had loved during by last visit to Thailand, I took Deva and Mitesh to Ayutthaya.

Back to the Temple Town

It was still dark ere the train dropped us at Ayutthaya station. The train staff was quite particular about waking us up so that we would not miss the stop. We figured it was too early to go knocking on the guest house door and decided to kill time at the station itself. 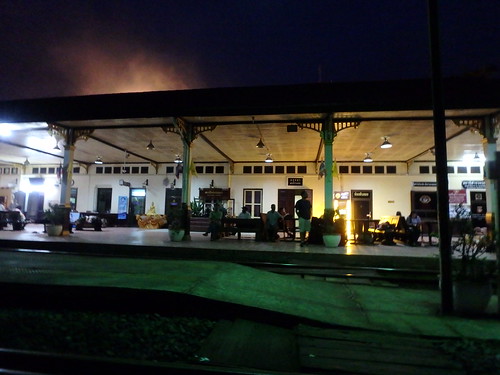 We dumped our bags and sat on the benches that were thoughtfully set up on the platform. In time we got into lengthy discussions about world politics and economics. Mitesh explained how the entire setup worked and how the strife between countries had changed form outright wars to economic hustle. There was so much that bewildered me, as to how we could have consciously agreed to and continue to live in such a strange setup!

We waited till around 7 AM to go try our luck at the guest house. It was a short walk from the station and they were nice enough to check us in this early and give us a room. It was a really pretty guest house, all wooden and decorated. I like such places. They seem to have more character to them than the bland concrete buildings. Tired and sleep starved, we settled in for a nap. 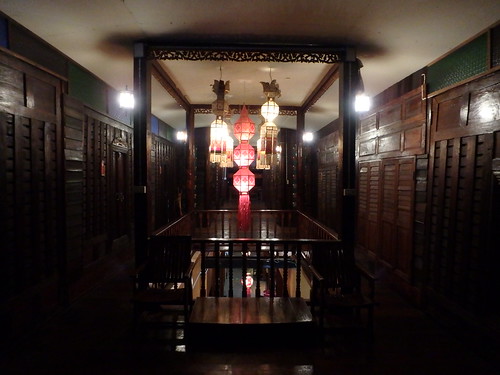 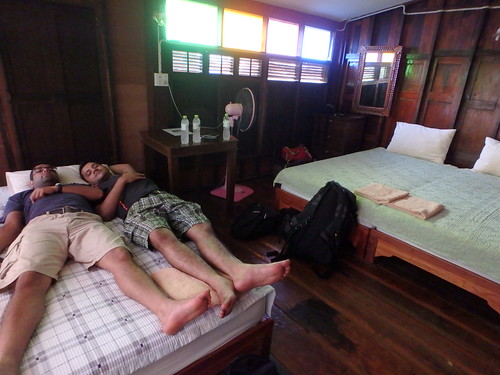 The heat of the day woke us up a few hours later and we took a cheap ferry across the river to the other side. This was the part of the town that I was familiar with from my last visit three months ago. We walked down the Naresuan road and I noticed a few new cafes and guesthouses in the vicinity of where I had stayed the last time. I took the guys to the chicken and rice place that I had been recommended during my last visit. We broke fast with good Thai food! 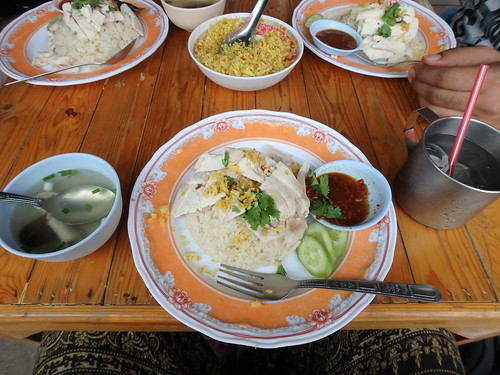 Next we decided to see Wat Mahathat, the main tourist temple that I had skipped the last time because it had an entrance fee. It was beautiful, like all the other temples of Ayyuthaya, and then there was the main attraction of Buddha head in the roots of the Bodhi tree. It was pretty impressive to look at but, as is usual of such attractions, somewhat over-hyped. We went around the temple looking at the headless statues and the ruined structures. If one was short of time, Wat Mahathat was a good way to summarize what Ayyuthaya had to offer. 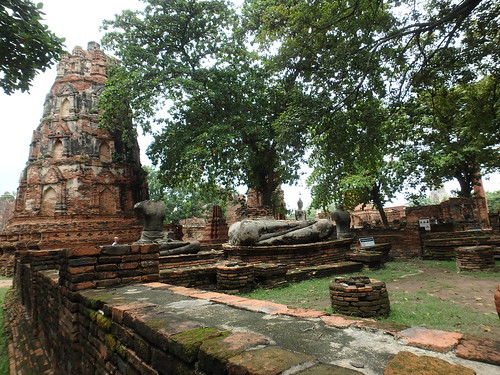 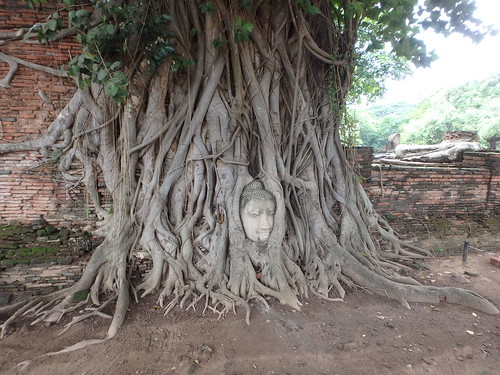 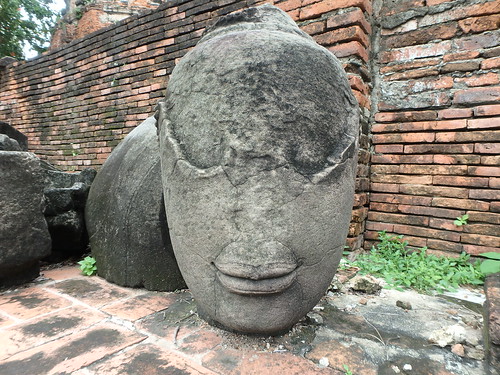 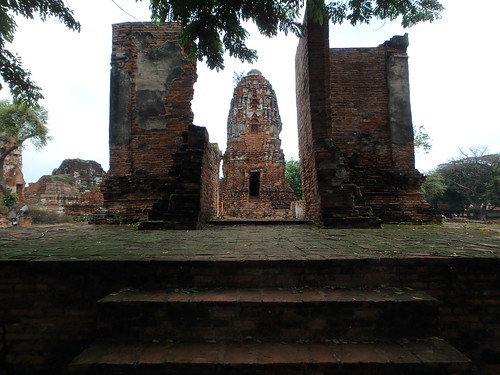 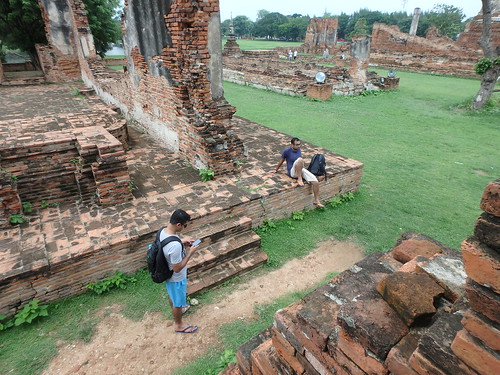 Next, we decided to rest a while and sat in a cafe to work and let the day’s heat pass by. The guys had planned on taking a boat ride around Ayutthaya that evening but then decided against it. I took them for a walking tour instead and might have over-walked them in my enthusiasm to show them around. We went beelining through the temples all the way to the Reclining Buddha statue and then came back through the park. This was my favourite part of Ayutthaya and one of the reasons why I loved it so. 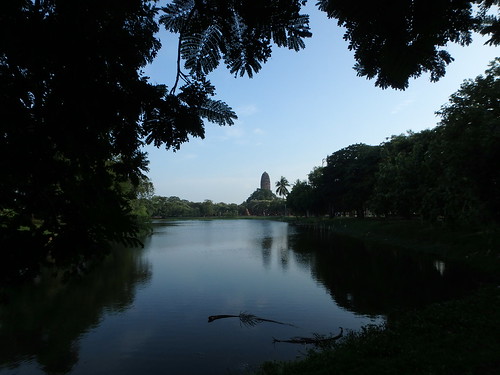 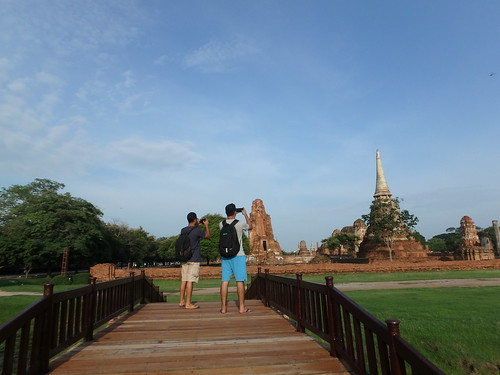 On the way back, we headed to the riverside for some good local food and bought a bottle of Sang Som from a nearby 7Eleven. We made it in time to catch the last ferry across the river and then sat down in the room to unwind over a couple of pegs of Thai whiskey and tech talks.

That night turned out to be as nostalgic as the entire day had been. This hotel was infested with bed bugs as well. My love for Ayutthaya seems to be matched by my luck in running into these bugs here. Mitesh was the one who was bitten by them but I was the one losing sleep over it. Eventually the morning dawned and I was sleep deprived, just like the last time.

Our flight back was early the next morning but we had planned on reaching the airport by the evening and spending the night at the airport. But there were quite a few hours to the evening as well so we decided to make most of the day. We went on another long walk and took a route that passed along some of the bigger temples that this side of the river had to offer. We were mostly fooling around on the roads and enjoying the pleasant weather. 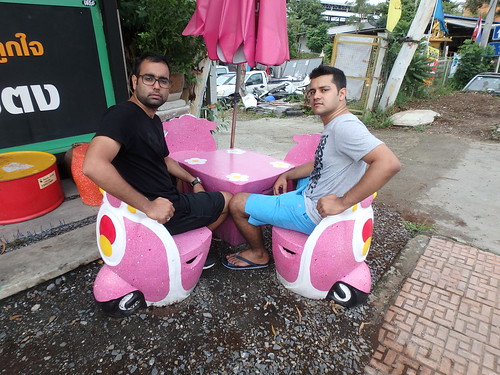 Of the temples that we visited this day, Wat Yai Chai Mongkhon was the more notable one and it was quite impressive. We spent some time here and then routed our way back to the hotel. 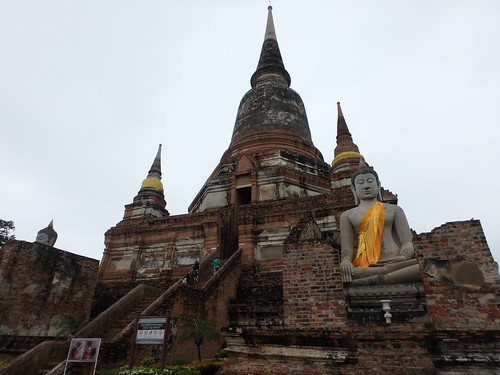 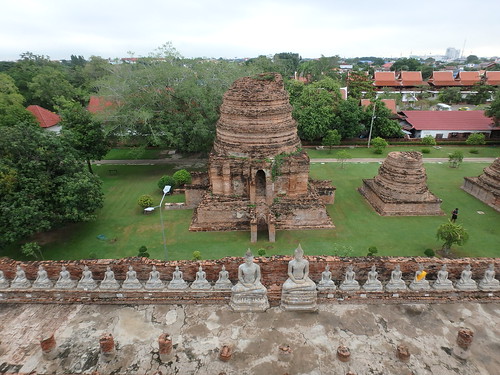 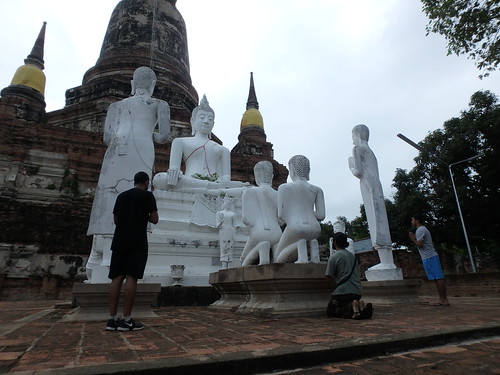 All of us freshened up and I went through my usual drill of checking my luggage thoroughly for any bugs and repacking it. By now this had become an extremely familiar routine. We checked out and then hopped cafes to kill a few more hours. I even tried a Thai massage for the first time since I had money to spare. I discovered that day what contortions my body was capable of!

Eventually we took a train to Don Muang and found ourselves in the outskirts of Bangkok an hour since.

We found ways to to keep ourselves busy till the airline counters opened. Then we checked in and tried more ways to kill time. Mitesh even managed to lose a bet (supposedly worth a bottle of whiskey) by challenging Deva’s packing skills! ? 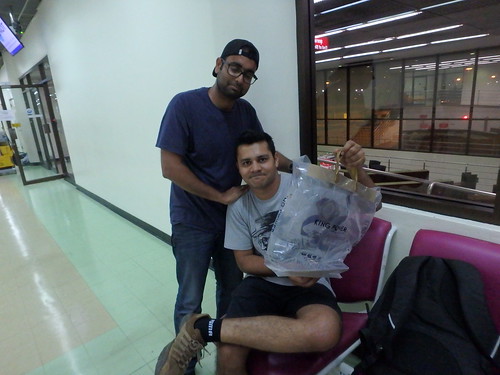 While Deva and I had our flight to Chennai, Mitesh was to fly to Bangalore. When it was time, we said goodbye to him and boarded the flight. As Bangkok depleted into a blurring display of light, I found myself in the chaos that was distinctly Indian. The two people sitting behind me chatted incessantly for the entire duration of the flight in rapid Tamil. The joys of travelling through Chennai!

At the airport Deva and I had similar lay-over times. So we made the most of it with filter coffees, dosas, parotas and general buffoonery. 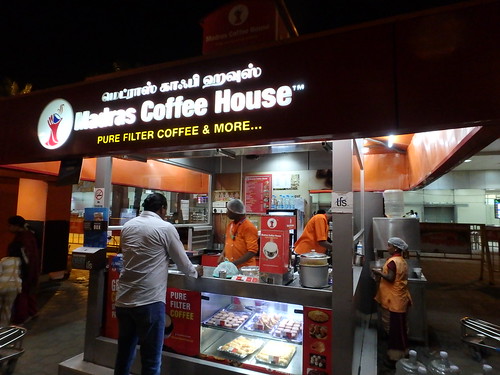 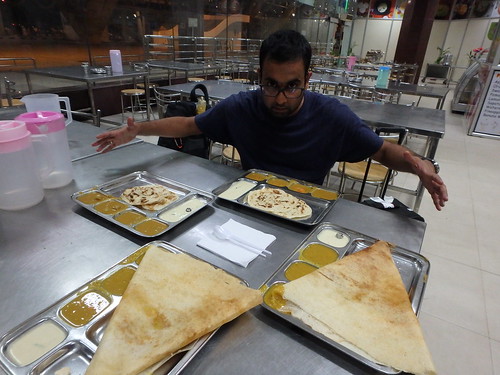 Eventually we said our goodbyes as well and parted ways to catch flights to our respective sweethearts. I landed in Pune close to 4 months after I had left it.

It has always been tricky talking about how it all felt. The entire journey. I was asked more than once by people with big fat grins, How does it feel to come out the other side?

I have a similar trouble summarizing the trip. Possibility aside, an attempt to condense an experience this vast into a few sentences would be a colossal injustice to all that I had gone through. The journey was not just physical, it was as much within.

What I took away from it all is a question that I can probably answer better. I learnt a whole lot about myself. I learnt who I am, what I am capable of, how I behave in situations, my strengths and weaknesses, my likes and dislikes. It was as if I discovered a whole new person inside of me. I realized how most of us never find ourselves in situations where we are forced to confront ourselves and therefore never truly understand ourselves.

I had decided to take off for a number of reasons. Reasons that were some kind of uncertainity or insecurity in one way or another. Perhaps everyone goes through such dilemma at some time in their life. This was just my way of reacting to my quandaries. My first few days in Thailand had been disastrous beyond my imagination. I was full of doubt. My mind wrestled with a number of ***What if?***’s. I had a tough time calming myself despite all the mental preparation I had done over the years. I used to check the calendar frequently to count the number of days that had passed and the number that was left. The initial unease slowly faded but there was always the lingering thought of ***What am I doing?***. Travel is a medium; a means to a higher end. What end was this that I sought? If you would ask me that today, I would smile and shrug my shoulders. Because truthfully, that is how I feel about it all.

But it was all magical. Every single bit of it. The places, the people, the road, the sceneries, all of it. I would not describe it in any other way. I did what I had dreamt of doing for the longest part of my life. There is a dubious pleasure to be had in realising one’s dream. There is a feeling of gaining the experience and losing the dream itself. But perhaps these dreams never really leave a vacuum in their wake. They give birth to other dreams to fill their space.

I still feel like my journey has not ended. Despite having stayed put in Pune for almost a year now, I still have the feeling of being adrift. I know my current state is temporary. And perhaps temporary is all that I seek anymore. And why not?

Find the previous posts in this series here. To those who have read the blogs, I would like to thank you truly and sincerely!

And here is the complete album of the final leg of the trip. 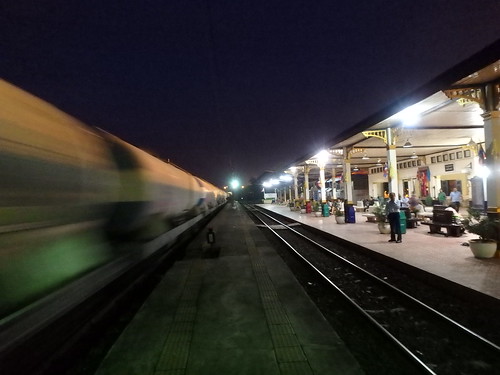